How good are you at reading people?
Can you look at people you know and assess their personalities?

Here is your chance to test your own instincts

Look at the descriptions of what he was doing in the photos; then check how accurate your body language read is by reading my assessment of him. The explanation of his posture and his expressions will give you a test of your body reading ability so that you can read your customers and the people you work with on a daily basis with more accuracy. 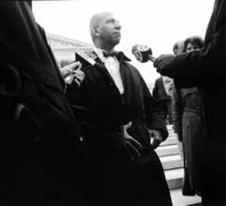 His face is “openly expressive” (unusual for a politician). His mouth is shut to keep his negative feelings from coming out. You know they're negative feelings because his lower lip is jutting out in a classic expression of defiance and contempt for what is going on. His eyes are looking up and to his left side, which can indicate that he is trying to create something new to say. This would also show he is not comfortable; he has to make up better things to say. There is an interesting mix of signals within his hand gestures. The one spread out in an expressive grasp combined with his negative facial expression make him look as if he wants to grasp or even choke the reporter.

His other hand is on his hip, both hands on the hips indicate that something is not right and “I need to defend myself.” Both hands on the hips is a male power posture. We hide our hands to hide our emotions and to suppress what actions we want to do with our hands. I believe he is trying to put his thumbs in his pocket so he does not fully show his defensiveness.

Clothing choices are revealing. Especially when someone is wearing clothing that is not normal for his environment. According to research on clothing choices, the bowtie signals a desire to be seen as unique and mature and sometimes a desire to be seen as a member of the upper or educated classes. I believe that an overly starched shirt signals a desire to be seen as formal and creates a facade or mask-like protection for the body. The shirt is pulled up and out and is deeply wrinkled. This happens when our movements go beyond the restraints of the shirt, its starch and tightly tucked-in measures. This shows us how the suit does not match the man and how difficult it is to hold that facade. The face is fascinating; the closed eyes could be a response to a flash, though there is no flash halo in the photo. We close our eyes to close out the current situation. The mouth is shut tightly and pulled back, reinforcing the overall read that he does not want to be there. 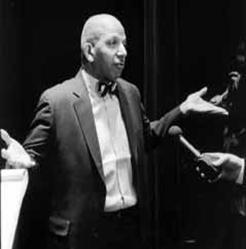 What do these mean ?

This is generally given to mean, “I don’t know” or “how could I possibly answer that?” The shrug is a defensive posture given when someone feels helpless. The shoulders rise to protect the head from attack. The palms-up gesture also shows vulnerability. Symbolically, he is saying, “I do not have the answer in my hands. Look at my hands. See they’re empty.”

The arms reach out with the palms showing to be hugged, sometimes to receive applause or in response to applause. The fact that he can hold this expansive gesture exposing so much of his body in a large public setting shows confidence. The smile on the face, the extension of the arms and the upward cupping of the hands lets us know he is enjoying himself and the kudos he is receiving. In fact, the upward cupping of the palms shows he wants to “hold” more applause. If the palms were facing flat toward the audience, he would be signaling a humble request for the applause to stop. This is the body language of a confident man.

He is impatient and is trying to hold himself in check. I read photos from the feet up as the torso is under less conscious control and provides a more accurate assessment. Look how there is very little weight on his front foot. The bend in the back leg indicates it is holding most of the weight. This stance combined with his other signals indicates his desire to back out of unpleasant situations. His arms are behind his back, again, showing emotions in the hands by trying to hide

his emotions by hiding his hands. Here, because his arms are held back tightly and so much is hidden, we know he is hiding strong emotions and is not just impatient. The shoulders are also pulled back again, treating posture that says, “I want to be out of here.” The tightly pressed-together lips and the lower lip pushed up almost covering the upper lip is a classic method of controlling anger or showing resignation. I see many photos of him in different situations were he has this pressed-lip expression, so I believe it is a characteristic mannerism.

(Note: This expression is sometimes done when someone is thinking. His looking up and away could suggest this meaning, but in the context of the other photos, I believe my first read is correct.)

I would say, after looking at all these photos and not knowing him or his personality from any other source, that he often tries to hide his inappropriate displeasure and anger.

How accurate were your assessments? Did you get some insights? Now try flipping through a magazine or newspaper and continue testing your ability. The secrets of body language will tell you the true meaning.

Patti Wood is the president of Communication Dynamics. Contact Patti by e-mail at patti@pattiwood.net . www.pattiwood.net

Invite Patti to be your keynote speaker at your next sales conference or to teach presentations skills to your team.